King Arthur has been imprisoned in Camelot Castle by the evil sorceress Crania. It's up to you, Arthur's trusted fellow, to gain access to Camelot, defeat the evil minions of the sorceress, to recover Excalibur, to confront and defeat Crania, and to wake King Arthur up from his enchanted sleep.

Visit adventuron.io (on a desktop PC) for the partner tutorial on how to code THIS GAME, step by step, using Adventuron Classroom.

Excalibur: Sword of Kings is an authorised remake of the ZX Spectrum game - made using the Adventuron text adventure authoring system.

Excalibur is an old-school text adventure, with easy difficulty.

This game incorporates an interactive tutorial into the first half of the (very short) game.

Hopefully this game will be a good starting point for introducing friends to the charms of traditional text adventure games.

Excalibur requires that the player types commands either by a hardware keyboard, or if on mobile platforms, software keyboards.

All commands should be ONE WORD or TWO WORDS.

To navigate, type one of the following commands (directions can also be clicked with mouse or touched on a touchscreen):

If the player wants to take a ladder, type:

If the player wants to drop the ladder, type:

If the player wants to examine the ladder, type:

If the player wants to redescribe the current location:

If the player wants to see what they are holding:

If the player wants to save or load the game:

If the player wants to do something, they should type the command in verb noun format - such as :

The requires the player to figure out the correct commands to resolve obstacles they face in the game.

Are there any enhancements?

Other than these, this is a straight remake.  No additional puzzles have been added.

Is this a port or a remake?

What is the purpose of the remake?

Ideal as a introduction to coding for 8-12 year olds, Adventuron Classroom features a full course on how to develop a full retro-style text adventure game..

It features tooling to make it easy to code, right inside the browser.

Export the game as HTML, ready to be published on Itch or other platforms.

Very cool. I'm crap at adventure games but this one was perhaps a bit too easy even for me. Excellent adventure to use as a tutorial for n00bs though. Well done!

I would take out the use of the mouse since most of the time your 2 hands will be typing on the keyboard. What about using space bar instead of the mouse? Great game

There is a need to take, drop and take the ladder again at the very beginning. Is this by design?

yes, only in the tutorial mode. To teach the get, inventory, and drop mechanics. If you switch off tutorial you don't need to do it.

If you want to get the correct password for the classroom thingy, you must keep the tutorial on... (or switch it on just before entering the castle with "TUTORIAL ON")... 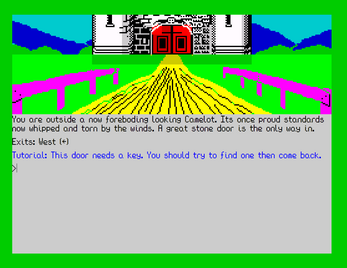 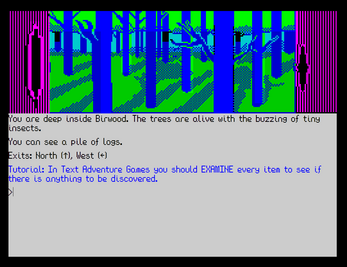 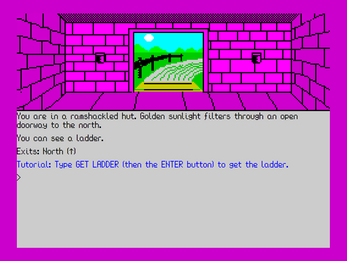